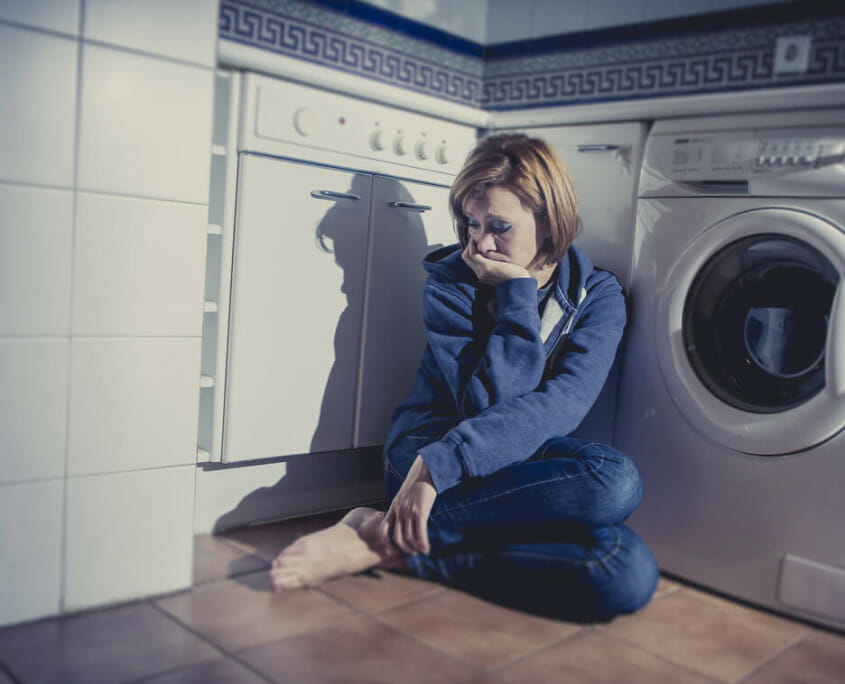 The day I was officially diagnosed with depression, I cried.

I mean, I had been crying for weeks, but this was different. I was crying because my crying had a name. A name I feared. I was mourning my diagnosis. Being told I was depressed was just so... depressing.

It took awhile to sink in, but as I began therapy and the medication did its job, I wasn't so scared of it anymore.

Until I got pregnant.

It wasn't just the hormones, though those didn't help. I was terrified and guilty and angry and ashamed that my children would have a mom that struggled with depression. I tried to be proactive with my treatment during and after my first pregnancy. If you had asked me before baby #1 arrived, I would have told you I was ready for the impending postpartum struggle.

I was ready to fight the same battle I fought years before. I didn't realize my feelings and symptoms would look different as a mom, so I didn't really recognize it.

Now, looking back, the fog didn't really lift until I got pregnant for a second time. It was then that I realized I had walked through the first 18 months of motherhood just sorta numb.

I'm not a numb person.

I'm sunshiney and enthusiastic. I feel deep and laugh hard. Just sorta numb is just not me.

During my second pregnancy, I spoke candidly with my OB about the increased possibility of postpartum depression, especially since my second pregnancy involved twins. I was careful to monitor any changes and be open with my husband about where I was at. I had a couple of sad days when I felt the hormones wash over me in deep waves. I had a couple of tearful, fearful nights when the anxiety gripped my lungs. But these were sprinkled over almost a year. Almost a year, with only a handful of emotional lows.

I woke up, looked at my husband and began to sob. Heaving heavy, strangling sobs. I couldn't stand. I couldn't move. All I wanted to do was sink into the mattress. My husband had to physically force me, gasping and weeping, into the bathroom to pee. A month of extreme fatigue and desperate sadness followed. The scariest and darkest time of my life, completely bedridden for nearly a month, with no end in sight.

I slowly came out of it. Little by little regaining energy and emotional stability. I started taking vitamins and antidepressants and going to therapy again.

I live with the threat of depression around every corner now, knowing that I could literally wake up one morning unable to move or function. But I choose not to live in fear. I choose not to live in the shame and guilt that my children have been burdened with a mom like me. I have decided instead to set an example through my depression. If this is the "thorn in my flesh" that I must travel with in this life, then let my children see me bear it well. Let them remember a woman who fought the good fight with every type of help--medicinal, spiritual, or physical--that was available to her. Let them see me as flawed and struggling, but committed to overcoming and believing God for healing and comfort every step of the way.

I think of the words of Shadrach, Meshach, and Abednego [Daniel chapter 3] as they faced the fiery furnace. "The God we serve is able to deliver us...but even if he does not...."

I pray that I am an example of a woman who stared into the fiery furnace of depression, knowing my God is able, but serving him regardless of the flames.

Today is a blue day. An "out of the blue," blue day. A heaviness about my shoulders and limbs. Sadness and fatigue pulling at my eyelids. Grayness clouding my normally sunny disposition. I'll make it till bedtime, pushing through, pulling it together, until I just can't anymore.

And I'll go to sleep knowing that "my God is able to deliver me, but even if he does not..."

Marie Osborne
Marie Osborne is a wife, mama, and blogger who loves Jesus and large non-fat lattes. As a former high school theater geek, she currently uses all her acting and vocal training reading "Where The Wild Things Are" and singing "Jesus Loves Me" before night-night time. When she isn’t laughing (loudly) with her 30-something husband, chatting (loudly) with her girlfriends, singing (loudly) with her 3-year-old son, or being attacked by playing with her twin girls, she’s probably Pinning recipes she wishes someone would make for her and binge watching Netflix during naptime. She's pretty sure toddler snot stains are the new black.
Recommended Posts
Showing 4 comments
pingbacks / trackbacks