Not Enough Mom to Go Around 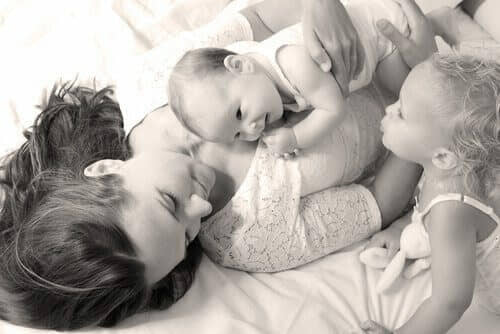 I am a mom of a toddler and twins, which is sort of a terrifying math problem.

It's just not enough mom to go around.

My twins' favorite position in life is one on each of my legs. Which, naturally, leaves no room for Big Brother. A big brother that continues to grow larger by the day, but also asks Mama to hold him so we can read and cuddle and sing.

Just not enough mom to go around.

And my son absolutely loves doing crafts. Right now we are doing an alphabetical "study" of the attributes of God with a craft for each letter. He's obsessed. There's cutting and gluing and song singing. (By the way, anyone know a hymn or worship song that describes God's comfort or as our Comforter? I'm stuck.) All of this requires a lot of attention, leaving little extra for the two other kids I have tugging on my skirt.

Never enough mom to go around.

I love my children, and I don't want to wish away this season. But with so many children so young and Mom spread so thin, it's nearly impossible to get through without searching for the light at the end of the tunnel: that glorious day when they enjoy each other's company enough to not need me Every Second Of The Day.

Which makes me think...perhaps my lacking will force them to find community and comfort in each other, building life-long friendships and love. And maybe that is kind of a victory in itself.

Maybe...perhaps...there is just enough mom to go around.

Enough to be perfectly deficient and force them to seek each other's company. Enough to force them to look forward to their father's embrace as well as my own. Enough to push them toward the sufficient love of Christ.

Yes, there is just enough mom to go around.

Cuz I'm pretty sure God knew exactly how much of me there was when he gave me this many children. The exact amount of mom he intended.

Marie Osborne
Marie Osborne is a wife, mama, and blogger who loves Jesus and large non-fat lattes. As a former high school theater geek, she currently uses all her acting and vocal training reading "Where The Wild Things Are" and singing "Jesus Loves Me" before night-night time. When she isn’t laughing (loudly) with her 30-something husband, chatting (loudly) with her girlfriends, singing (loudly) with her 3-year-old son, or being attacked by playing with her twin girls, she’s probably Pinning recipes she wishes someone would make for her and binge watching Netflix during naptime. She's pretty sure toddler snot stains are the new black.
Recommended Posts
Showing 2 comments