It's been said that R2D2 is the most vulgar movie character of all-time.

After all, the director bleeped out every single word he said.

Recently I took my oldest son with me to see the first show on opening night of Star Wars: The Force Awakens. According to him, it was "the best day ever."

It's not the first time he's said this. We've had many experiences over the years that qualified as "the best day ever." Every time he's made this claim, there's been one common theme: They've all been something we've never done before, and he had no preconceived expectations.

I call them "spoiler-free" moments.

Creating these moments isn't easy to accomplish when it comes to movies. These days just walking down the toy aisle at Wal-Mart will spoil a movie's plot through the merchandise alone, not to mention movie trailers and commercials.

But somehow we avoided all of that with Star Wars. 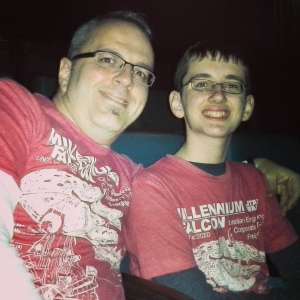 After an early dinner at a local Chinese buffet, we arrived at the theater two hours before showtime to get the best seats in the house and wait with the other fans.

Finally, the big moment arrived. The theater dimmed as one of the most famous opening lines of a movie emerged on the screen:

A silent giddiness consumed the theater.

I leaned over to my son and whispered, "Remember this moment."

As the Star Wars logo filled the screen, he yelled out "WOO-HOO!" and soon the whole theater joined in. He leaned over to me and said, "I started that!"

From there, we were caught up in the epic story from start to finish.

I could tell during our ride home how much he'd gotten out of the experience. I asked him, "How did it feel not knowing anything going in?"

He replied, "It was so hard to avoid it all, but I'm so glad I did. I felt like I almost saw something in a magazine about it and I was mad because I didn't want to ruin the movie. I've had that happen before where I felt like there weren't any surprises going in, but this time it was different. Seriously, one of the best days of my life!"

The analogy was obvious, and I couldn't resist the opportunity for a lesson.

"You know," I began, "a lot of things in life are going to be like that. A lot of people won't think twice about spoiling things that should be saved for the right moment. It could be something like sex before marriage or the way we trust the authority in our life. Tonight you experienced the joy of waiting and not ruining something ahead of time. Do you understand the parallels?"

He nodded. It got deep.

I'm certainly not an expert on this, but as I looked back on the night I thought of three things that help my son stay spoiler-free.

Epic galactic movies aside, helping our kids be "spoiler-free" doesn't mean they won't make mistakes and rush into experiences prematurely. But by helping them practice self-control in small things like movies, perhaps they'll be able to save the larger things (like sex for marriage) with greater enthusiasm since they'll know the value of delayed gratification.

And perhaps that will lead to multiple "best days ever" with their future spouse and kids.

What tips, thoughts, or hopes do you have on this?

Tony Myles
Tony Myles is a real guy with a real family following a real God. His most recent book If... What If was co-written with his son to help families journey through the Bible and life together. Tony and his bride Katie have been married and honeymooning for a whole lot of years. These days they're parenting their kids through college, high school and elementary school. Depending upon when you bump into him, you can find Tony serving families and students at Riverside Church, writing a book or newspaper column, hanging out with teenagers or sitting across the table from someone needing perspective. If it’s a really good day, you just might find him sipping on a fruit smoothie.
Recommended Posts
Comments
pingbacks / trackbacks