Fatherhood: Pranks and Thanks 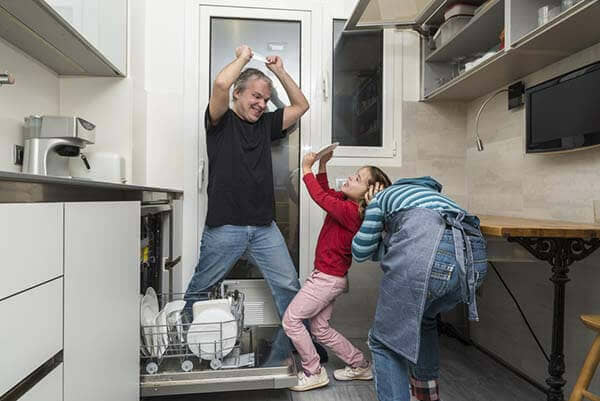 It was my first father-son prank phone call... sort of.

Our local basketball team was up by 15 points in an NBA finals game, and we were loving it. I felt randomly inspired to look up a random pizza place in the hometown of the other team, call them on speakerphone in front of my kid, and ask the unsuspecting person on the other end, "So, how's it feel?"

My son thought it was hilarious. "Can I tell my friends you did that?" he asked. "I mean, is this okay?"

I remember pausing and considering if that was okay.

This was the first prank call with my son... but it wasn't the first time I'd been a part of a call like this. I got the idea from my dad years ago.

It was one of the more memorable times my dad and I bonded.

It was 1986, and our team, the Chicago Bears, faced the New England Patriots in the Super Bowl. My dad looked up some random phone numbers from the New England area in this yellow paper contraption called a phone book. During halftime, we let a handful of hotels and restaurants on that side of the country know that the Myles men were loving our team being way ahead of theirs. "How's it feel?" we asked.  It didn't matter if our team lost (and they didn't) - we took the risk.

My dad and I had other  moments like this as I grew up, like when he took me on a Cub Scout trip and a kid spit in my chili at the campfire. My dad seized his parental right to take me off-site and get some McDonald's cheeseburgers as an alternative to the aforementioned saliva-drenched meal. He risked offending other dads or "the way things are done" at such events, but I didn't go to bed hungry that night.

I'm likewise reminded of when I was 8-years old and my dad was lighting bottle rockets during a Fourth of July cookout. I ran each one out to him and one of my uncles as they shot them through a metal pipe into the air. At some point, they began aiming the pipe at a nearby stop sign across the street. My dad nailed it the first time, but on his second attempt he shot the back of our neighbor's house. I remember watching him slink down in embarrassment for a few minutes, only to then find his footing again at the cookout away from the fireworks.

Sometimes a kid just needs to watch the risks a parent is taking (and how the parent responds to success and failure).

Such risks can be in the little things, too. I can still visualize my dad sitting at his home office desk, tinkering on a gigantic beige plastic box (something called a personal computer) that he'd picked up at Radio Shack. "How weird," I thought. "It's a cool device, but computers will never catch on. He's just wasting his time behind that thing."

Another time when I was a teenager my friends and I were attacked by some other students who were drunk and looking for a fight. I had to walk into the house and explain what had happened; how I was fine, but one of my good buddies was bleeding because I hadn't protected him like I should have. Later that night in retaliation, my dad told me he found the main instigator's house and dumped some garbage on his lawn.

I remember pausing and considering if that was okay.

Sometimes a kid just needs to question the risks a parent is taking (and how the parent responds to agreement and push back).

Perhaps that's why I was intrigued by my son's question when he asked me about whether the phone call prank we were doing could be shared with friends or  if it was okay. It was more than him asking me to clarify where the line was on playful smack-talk versus being inappropriately annoying - it was him wondering out loud if I could be questioned.

Genuine humility is needed on both sides of such a conversation.

Every time a parent pushes a boundary, it can involve potential embarrassment in the pursuit of defying the ordinary. These moments unfortunately also have the potential to go someplace dark and unintended, like when a parent blankly tells a kid "It's okay to do _____. Everybody does."

Our team did lose that night. "How will you feel about that phone call now?" my son asked before heading to bed.

"I'm not sure," I replied, "Maybe it doesn't matter if our team loses - we took the risk."

He nodded and smiled. "Thanks, Dad."

I wonder what he'll remember about that.

I wonder what he'll remember about me.

I wonder what God thinks about prank phone calls.

I wonder what the takeaway is for us as parents.