Having a voice in the life of your family

I'm at a point in life when I know more celebrities who died this year than I do *celebrity* faces on grocery store magazines.

What qualifies as "famous" isn't what it used to be. Once upon a time, a politician needed to have something to say in order to get elected... an actor or actress needed to be halfway-decent at their craft if they hoped to be in a blockbuster movie... the news only covered the most important stories that the 30 to 60 minutes they broadcasted would allow for.

This isn't a post meant to complain about the demise of our culture due to politics, entertainment or sensationalism.

I'm just a dad trying to figure out who's going to get a voice into my kids' lives.

And by that, I mean not who I will allow to have that voice... but who will end up having that voice due to proximity.

My parents were around for the most part when I was growing up. Still, I never really felt direction from them as much as I did a laissez-faire approach to parenting. My dad once told me, "If you want to sell pizzas, I'll order a sausage with extra cheese. If you want to rob a bank, I'll drive the getaway car." For my fourteenth birthday, they pitched in to give me a subscription to Playboy magazine. I'm sure was all intended to be supportive and culturally hip, but it left me scratching my head more than taking a step.

It's all an intriguing contrast to the home my wife and I have attempted to forge. We've learned that the most important "voice" has to be the Holy Spirit of God himself, but not at the expense of becoming spiritually laissez-faire either. It's meant remembering to listen for Him instead of trying to assert our personality into each other more than we should. Likewise, we've folded that tension into our parenting as we love and lead our kids into a fully alive connection with Jesus Christ. 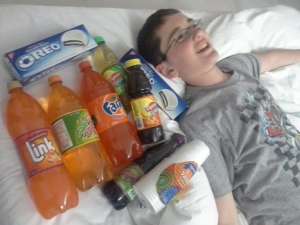 I've noticed this in various conversations with each of my kids. My oldest son is 13-years old this year, and he seems to be right in that place of wanting to honor us while hoping to safely experiment with owning his own identity. For example, this has been the year for him to regularly try new foods instead of only eat what he's familiar with. He'll often ask me if I think he'd like something atypical that is on a menu. I've learned to tell him what I know of the taste of the food, but to not sway him toward it or away from it.

I've explained that these are areas of personal opinions where healthy freedoms create healthy choices.

In other areas, such as whether or not we're going to be a family who attends church, we've clarified that there isn't any debate on the value. We're not legalistic about it - which seems to be every parent's fear (why is that?). What we are is as consistent as we can be - which seems to be every parent's hurdle (why is that?). Simply put, my wife and I value the value we want our kids to value, whether they value it or not. It's also why we shop for certain groceries over others, have bedtimes on certain nights over others, approve some extracurriculars over others and spend money on certain purchases over others.

I've explained that these are areas of rooted values where healthy boundaries create healthy foundations.

But again... it's a tension. That means that in the end two things must happen for it to all even work:

Obviously, these things are also true for my wife. We're a team on this. but I'd also love to hear your voice. Where do you stand with all of this?